Pembrokeshire led the way in reducing food waste and making use of surplus food with the first surplus food cafe in Wales in 2013. It is now home to two community fridges, in Fishguard and Goodwick (another first for Wales!) and Narberth – both part of Hubbub’s Community Fridge Network. The idea is spreading with more community fridges to open in Pembrokeshire and visits from interested groups from across Wales looking to set up more.

If you’ve not heard of community fridges, essentially, they operate as a free or ‘pay-as-you-feel’ shop, abiding by the same environmental health standards for food safety as other food businesses. Often set up by community groups, they are housed in publicly accessible spaces. Combined with storage for ambient food, they are stocked with surplus food from supermarkets, local shops and other food businesses as well as donations from local people. Everyone is welcome to take food, the focus being on sharing good food and ensuring it is eaten – they are not food banks. 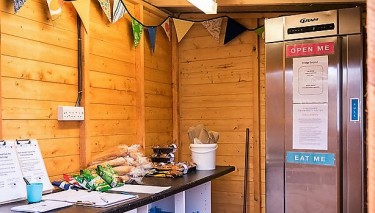 The Fishguard and Goodwick community fridge opened in November 2017, following on from Transition Cafe, to make good use of surplus food. The purpose of Transition Bro Gwaun (TBG), who set up both initiatives in Fishguard, is to deliver innovative local solutions that address global environmental challenges. In the first 10 months their community fridge has processed over 5 tonnes of food, equivalent to 1 kg per person, in this small coastal community. Drawing on figures from WRAP, in this UK Government report, this equates to 20 tonnes of CO2 being avoided by reducing food waste.

Food waste and surplus food have become newsworthy topics in recent years with many mainstream media reports suggesting supermarkets are the main culprit. However, looking at data available from WRAP and the FAO the truth may be a little less palatable, with two-thirds of UK food waste coming from our homes.

Across the UK, WRAP estimate we throw away 7 million tonnes of food from households every year, or approximately 110 kg per person, equivalent to 440 kg of CO2. Similar figures are cited by the FAO for other Western European countries and the USA. From my personal experience working on TBG’s surplus food projects very few people admit to wasting food and usually think it is someone else’s problem..!

Current Love Food, Hate Waste campaigns are based on evidence that targeting groups of people is more effective than a blanket message. For example #MakeToastNotWaste and #GiveACluck are aimed at young people via social media. This is not to say that this age-group wastes more, rather that there are many reasons we all waste food and that life-stage and lifestyle play a part.

Drawdown identify reducing food waste to be one of the most effective ways to reduce greenhouse gas emissions globally, especially as food which ends up in landfill breaks down anaerobically, producing methane. Considering the resources used to grow, feed, water, harvest, produce and transport food and then subsequently disposing of it into landfill, food waste is accountable for roughly 8% of global emissions.

More positively, WRAP found that the quantity of food waste from homes went down in Wales by 12% between 2009 to 2015. We have the knowledge and experience in Wales to reduce food waste, with support from progressive Welsh Government policies. What we need are the resources to continue to reduce food waste throughout the food system. This is a trend that we must maintain!

One thought on “How community fridges cut food waste”