By Amber Wheeler, PhD student at University of South Wales, @amberfood on Twitter

I agree with Pamela Mason that we need new sustainable dietary guidelines in Wales. But if we really want to improve the well-being of current and future generations in Wales, as per the Well-being of Future Generations (Wales) Act 2015, guidelines must be targeted at all parts of the food system – not just at the consumer, like previously. Take the case of fruit and vegetables, and one of the most well known dietary guidelines: ‘5 a day’.

Although everybody knows they should be eating five portions of fruit and vegetables per day, the campaign has been hugely unsuccessful in terms of making a difference to consumption. In fact, consumption has gone down by 7% in Wales since the campaign was introduced by the UK Department of Health in 2003.

When the campaign was launched, 39% of people ate ‘5 a day’ compared to 32% now. Wales now has the lowest reported consumption of fruit and vegetables in the UK (Public Health Wales Observatory, 2013). The implications for the health of the nation are stark. The UK Faculty of Public Health (2005) estimates that a poor diet is linked to 30% of life years lost in early death or disability.

So why has this campaign been such a failure? I would argue it’s because it has focused on just one small part of the food system: namely, consumers. This is not enough to drive change in the whole system. 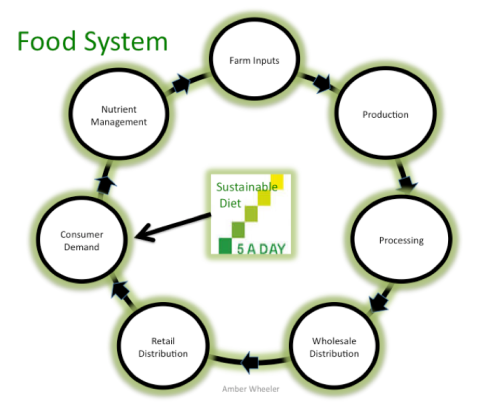 While people are told to eat more fruit and vegetables, the rest of the food system is making available ever-more-processed foods at ever-decreasing prices, relegating fruit and vegetables to the expensive and inconvenient choice. Healthy food is now estimated to be 3 times more expensive than unhealthy food per calorie (Jones et al, 2014) meaning that lower-income households are more likely to be overweight/obese (Fabien Society, 2015).

In a hospital café I visited the other day I couldn’t find any portions of fruit or vegetables to buy. So my daughter, who was ill and hungry, had a glass of pop and a packet of crisps when I would have bought her a glass of fruit juice and an apple. We have to create contexts that enable, not inhibit, healthy behaviour.

If all parts of the food system were working towards increasing the availability of fruit and vegetables, perhaps the ‘5 a day’ campaign would have been more successful, and Wales would be healthier.

What we need to do is put sustainable dietary guidelines at the heart of our food system, along the lines of the ecological public health model proposed by Tim Lang and others (Lang and Rayner, 2012), so that the whole food system is working towards them. In terms of fruit and vegetables it might look something like this: 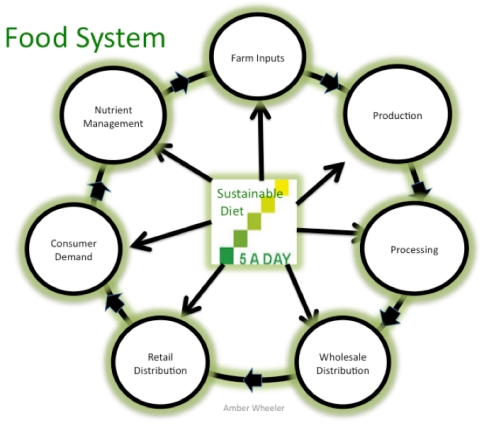 If we look at production and retail distribution: Wales currently has around 1.5 million hectares of agricultural land, but only 1449 hectares grows fruit and vegetables. That’s just 0.1% of agricultural land growing an essential part of the Welsh population’s diet, contributing to an estimated measly 3% of the nation’s fruit and vegetable requirement. 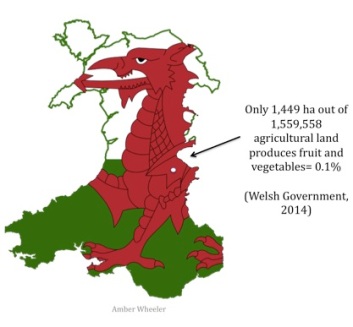 The fruit and vegetable requirement of the Welsh population per year is 620,000 tonnes*. If we were to be able to grow 100% of this in Wales, at a realistic yield of 14 tonnes per hectare**, this would require 44,286 hectares of land – 31 times more than the present but still only 2.8% of all agricultural land. Wales should be aiming to produce more of its fruit and vegetable requirement than it does now: 5%, 20%, 50%, 100%? What do you think?

In terms of retail food distribution, minimum requirements should be set for fruit and vegetable availability. For example, for every meal-buying customer in a hospital café there should have to be at least one portion of fruit or vegetables available. Buffets should have to supply at least one portion of fruit or vegetables per person and so on. Catering staff should receive training on how to increase fruit and vegetable content during food hygiene courses. These actions would automatically lead to increases in demand that Welsh producers could tap in to.

The possible benefits extend well beyond the health of consumers to more businesses, more jobs, more training opportunities, more prosperity, more diversity, and more resilience. In fact, this approach has the potential to contribute to all seven goals of the Well-being of Future Generations (Wales) Act 2015: a more prosperous Wales, a more resilient Wales, a healthier Wales, a more equal Wales, a Wales of cohesive communities, a Wales of vibrant culture with thriving Welsh language and a globally responsive Wales. It would also fit into the new vision proposed for Welsh Agriculture: ‘A prosperous, resilient agriculture industry promoting Wales’ present and future well-being.’ (WG, 2015, p.5).

By targeting the sustainable dietary guidelines, like the ‘5 a day’ message, at every part of the food system, it should be possible to create an environment where eating more fruit and vegetables is the affordable and convenient choice. This should lead to increases in consumption, improvements to health and well-being, and wider sustainability. All of which the ‘5 a day’ campaign, targeted solely at consumers, failed to achieve alone.

Amber Wheeler is currently undertaking a PhD at the University of South Wales exploring a ‘needs and capacity’ approach to the potential development of a more secure and sustainable food system using the fruit and vegetable sector in Wales. If you have any ideas you would like to contribute please tweet @amberfood or contact: amber.wheeler@southwales.ac.uk

Fabian Society. (2015) A recipe for inequality. Why our food system is leaving low-income households behind. Retrieved from http://foodandpoverty.org.uk/wp-content/uploads/2015/03/ARecipeforInequality_WEB.pdf